It's a beautiful Sunday afternoon here, and Matt and I are having a relaxing day. Our new tradition is walking to a cafe called On The House on Sunday mornings...many businesses are closed and people stay home with family, so we can get around on foot without too many roadblocks.  Matt gets Eggs Benedict, with BACON even! I had fresh ginger and banana french toast with a cinnamon latte...very tasty, especially for under 8 bucks! They even have real orange juice, which is the only place I've had it. Clearly it's the little things in life we look forward to...

On the walk back I even got some wonderful smelling flowers for about a dollar. 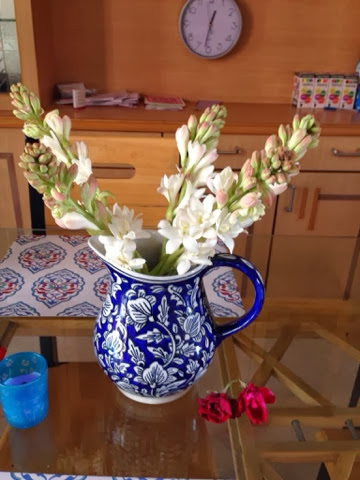 Matt just left to go golfing, so this is the perfect time to update everyone on what we've been up to.
Last week our friends Brandon and Valerie invited us to an early Holi celebration at the American Embassy School where their four kids go. (Brandon is the only other American expat here from Polaris, but they live in Delhi). To sum it up, Holi is the celebration of spring arriving, but it has several other meanings.  Essentially it is a day where people get drunk and throw toxic paint at each other...fun, huh? I just read an article about how after last year's Holi, many people reported loss of vision and skin infecton due to the toxins in the paint. Since that does not sound like my idea of fun, we opted for a safe celebration at the embassy school.  Next week when the real Holi comes around, we will likely enjoy the colors from a distance. 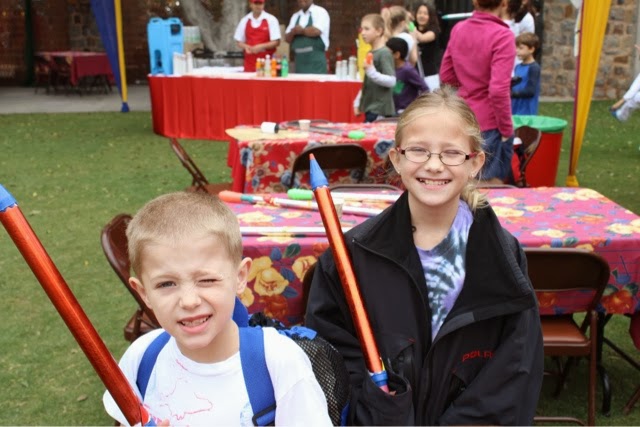 Getting their water guns ready! 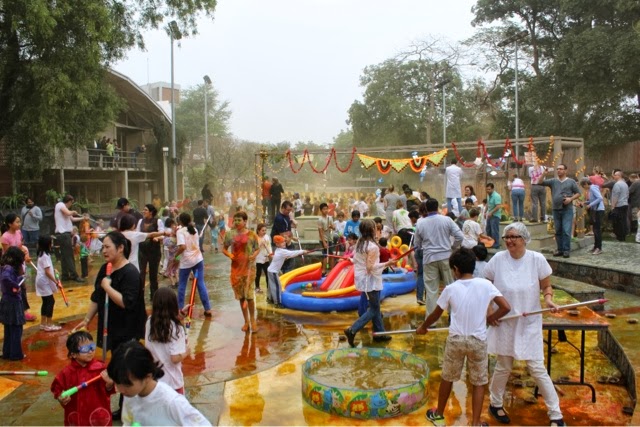 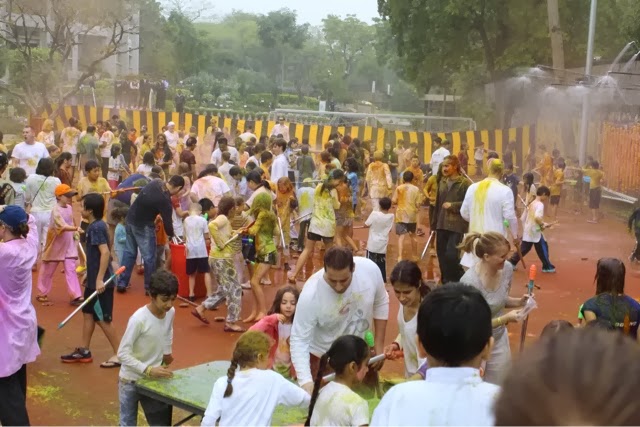 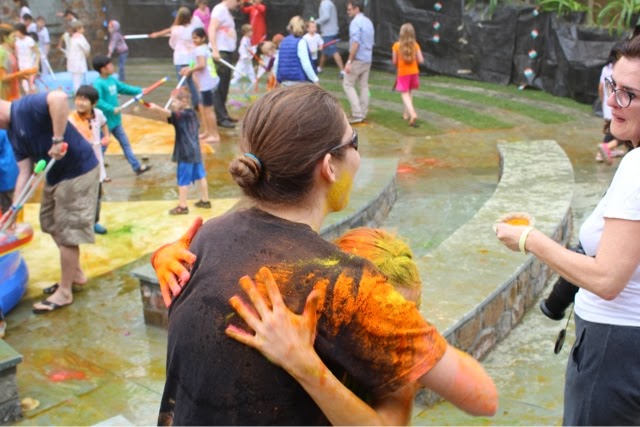 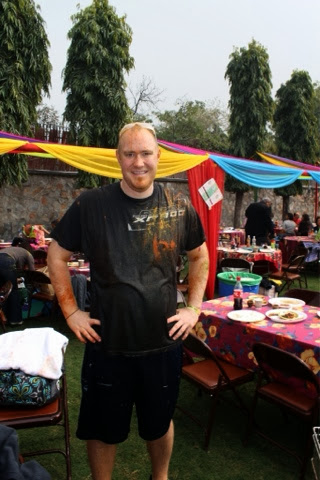 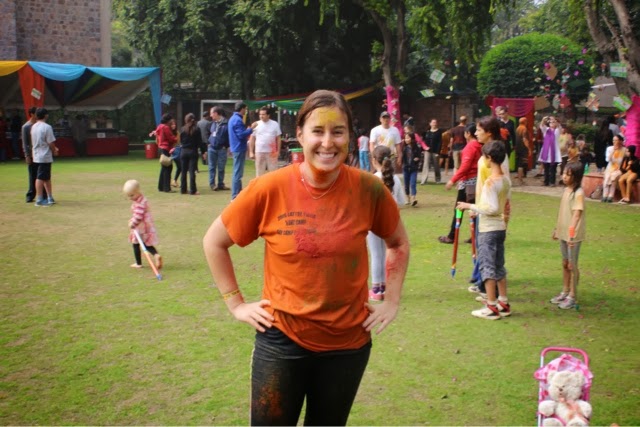 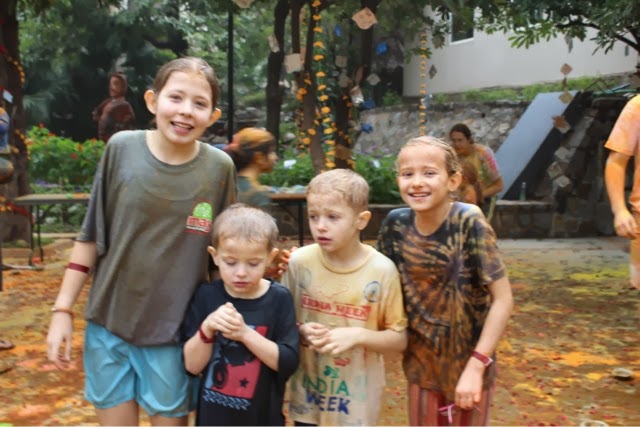 The boys were too freezing after rinsing their paint off to smile for this picture.

Matt and I had a blast throwing paint and water at each other. Some of these kids have no shame, and I got several buckets of water dumped over my head. It was great to spend time with Brandon, Valerie, and their wonderful family, and chow down on some chicken hotdogs and Indian sweets afterwards.

Another celebration I joined in on was International Womens' Day. The woman, Jaimala, who organazises both the school and women artisans, put on a large celebration at the school campus. Women who are part of Anoothi, making crafts, came from Jaipur and Ajmer (about 4 hours away). About 150 women came, and there were several doctors providing medical check ups, a professional karate instructor teaching self defense, and a big lunch and dancing.

I arrived in the morning as large buses of women were just starting to filter in. We enjoyed samosas which are a yummy fried pastry filled with spicy potatoes, peas, and onions. Afterwards everyone gathered for the self defense class. 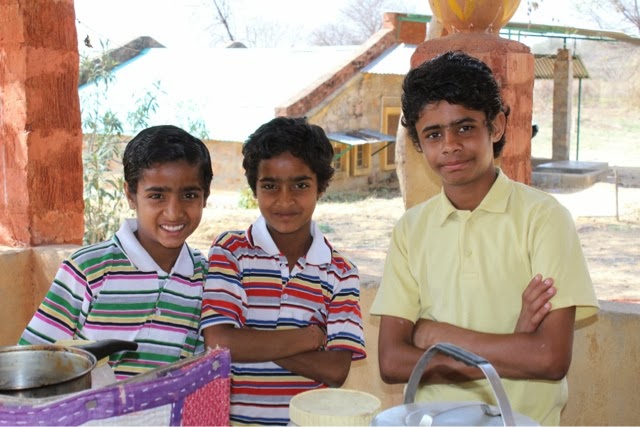 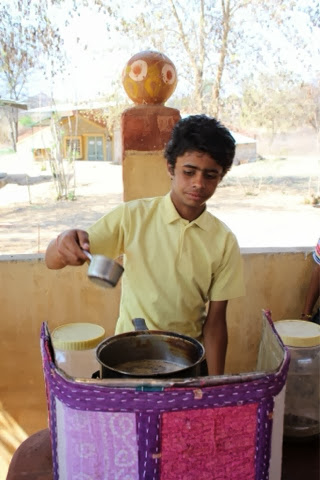 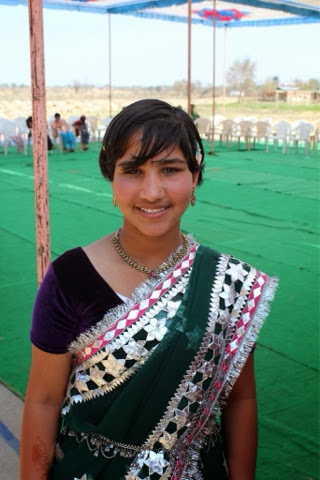 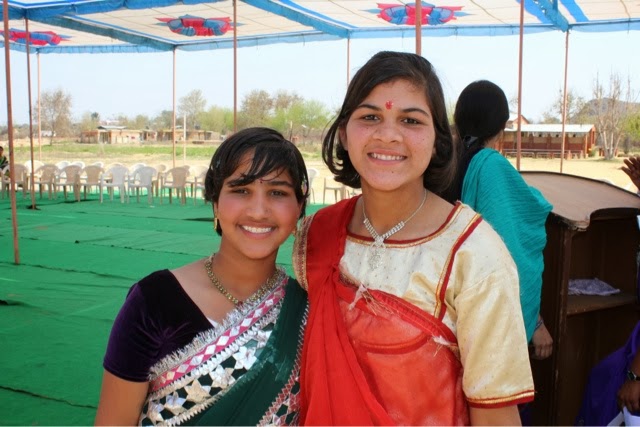 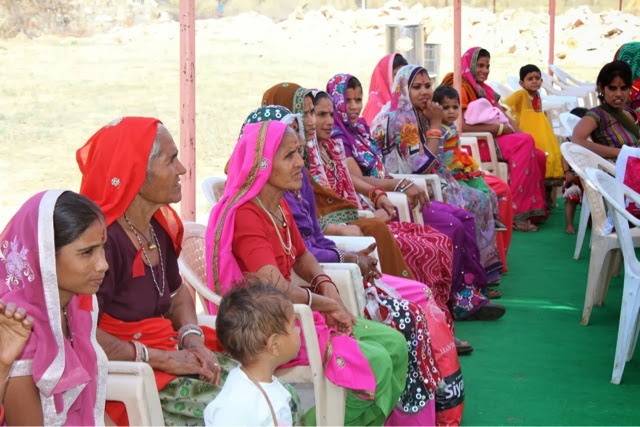 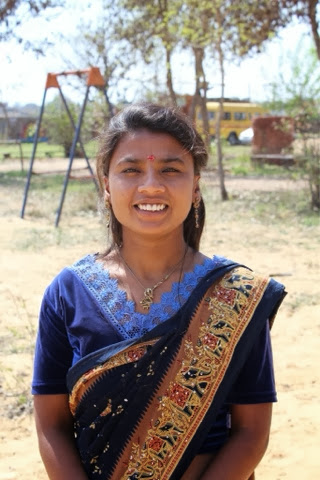 Pervine - teacher to the youngest class 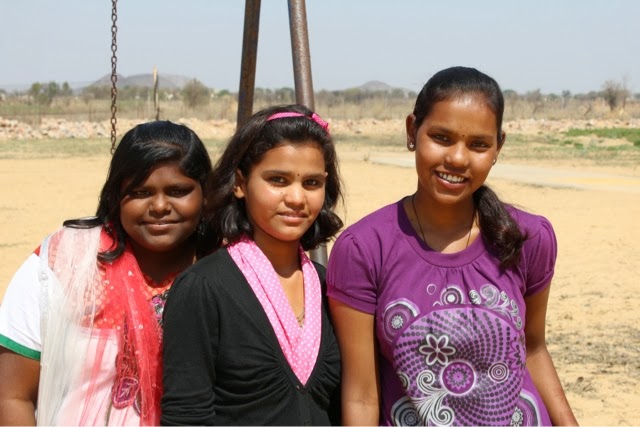 I will butcher the spelling of these girls names, so I won't try 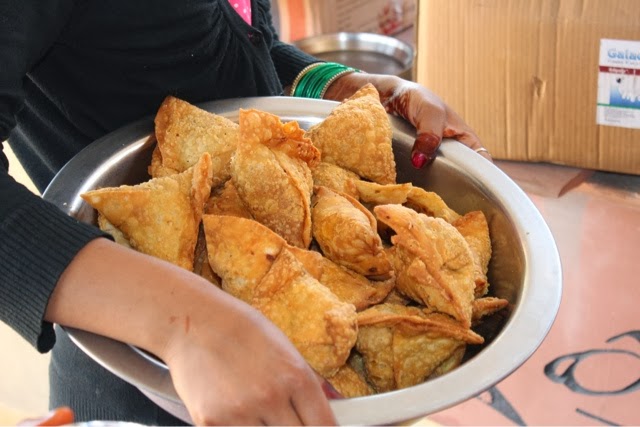 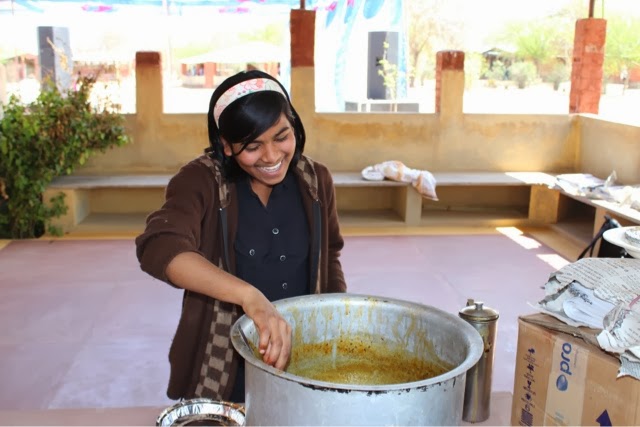 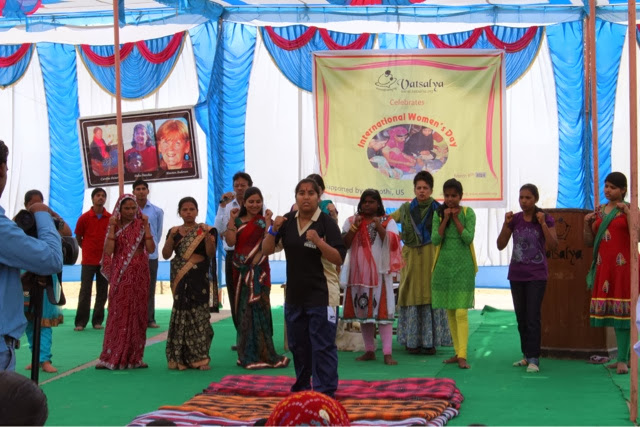 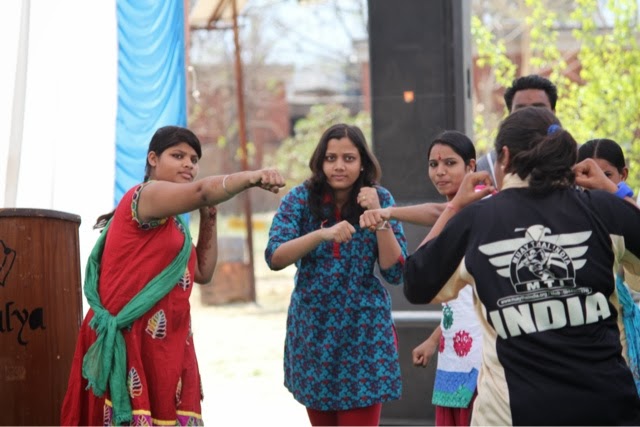 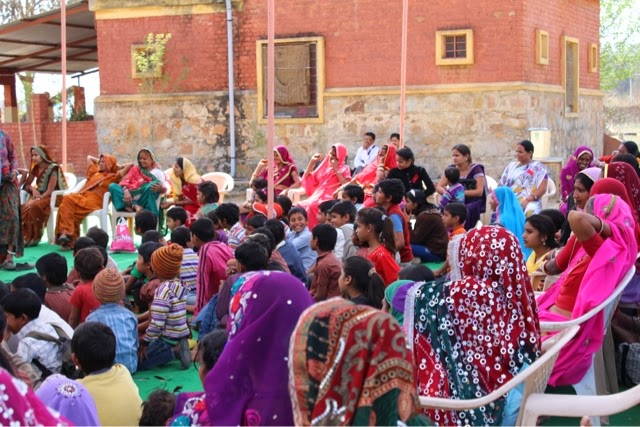 Not long after this last picture was taken, all hell broke loose.

I was standing in back taking some photos, when a bee began swarming around Adam's head. (He is a volunteer from Scotland who's still here about another week). He had gotten so annoyed by this bee he decided to retreat back to his room.  After a few minutes there were several bees causing a ruckus. Before I knew it, there were literally thousands of bees headed towards us! Chaos immediately ensued, with people running and screaming, knocking chairs over and headed in all different directions. I saw several people who for whatever reason attracted the bees the most, and they were covered with them yelling and shaking as if they were on fire.  I quickly ran back for my camera bag, which at this point I even considered leaving behind, risking not seeing it again. I started running towards where the car would be, and Ajay had pulled in closer to where I was, yelling for me to get in with several others already taking shelter in there.

If you ever want to hear grown men scream and yell like little girls, then show them bees! I was in my car with Ajay and three teachers from school, and it was chaos! I had a bee on my shirt and they were more scared than I was. One of them grabbed it with my scarf, and since we couldn't throw it out the window, I had to suffocate it in a bag. Everyone was shouting in Hindi and I had no idea what was going on, all I knew was I wanted to get the heck out of there! I told Ajay we needed to get these teachers somewhere safe, and I wanted to go home NOW! If you look closely at this picture, you can see the bees. 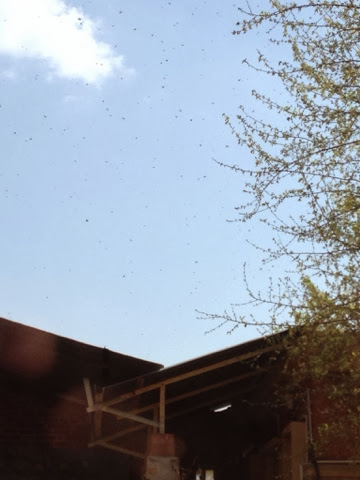 So, to wrap up this ridiculous story, we dropped off the teachers to safety, and I got out of there safely. Jaimala called me shortly after to check on me and tell me only a few were really hurt, and that the party was resuming - that part shocked me!

Apparently a boy who is not a student but came with his mother that day, had thrown something at the hive which caused this whole disaster. I bet he got a real good spanking.

The next thing to teach these women: how to act during an ambush. I will personally fund this one. :)