Teej Festival was this Friday and Saturday and Matt and I had a great time seeing the celebration.  Ajay took us to the City Palace on Friday night to see the parade of the royal family.  The festival celebrates Goddess Pavarti and her union with Lord Shiva, and takes place on the third day after a moonless night during the Indian month of Shrwana. It also recognizes the end of monsoon season (even though it keeps raining here!)  Women wear beautiful sarees and have henna applied.

We had to park about a kilometer from the City Palace, and walked down the busy street towards the parade. On the way we saw a group of monkeys! 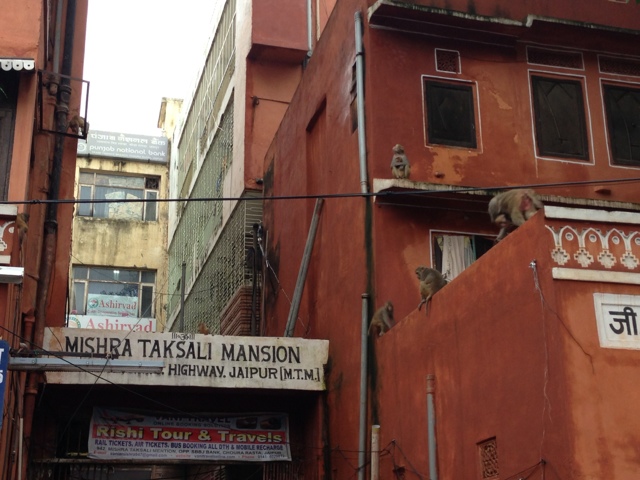 When we arrived at the palace entrance, there were people lined up on both sides of the street. There were men carrying flags of Pavarti, similar to totem polls.  One man carries it, and he is surrounded by dozens of other men prepared to catch it incase it falls...which it almost did many times. While Matt and I were watching the crowd, Ajay had found a great place for us to see the parade. We went up to a rooftop designated for tourists. There were many Europeans up there. A type of sweet cake was served to everyone, and women were there to apply henna (sometimes called mendhi). I got my first henna art there! The henna comes out of a tube similar to a toothpaste tube, is very thick. It dries for about an hour, and then you can wash it off to reveal the orange-ish dye. I of course smeared some on my jeans. When the actual parade finally started, it was hard to see because everyone was standing on their chairs, and many had their umbrellas open.  Ajay was able to get us onto another side of the rooftop which only had a few people there. I sat on the edge of the roof for a great view.