In the past week I have accomplished a lot...well, a lot of eating, sleeping and sight seeing. Since leaving Minnesota a week ago, we spent a week in Barcelona, Spain. It was a great feeling to have wrapped up everything back home and feel like we could finally relax.

We walked A LOT in Barcelona. Some of my favorite sights were Sagrada Familia, Park Guell, and Montserrat. Matt and I are a good team when traveling... I research places we should visit, and he figures out how to get us there. I am terrible at reading maps or figuring out which train to take.

Besides sights, we spent some time relaxing on the beach. There is a lot of money there! Tons of yachts, sailboats, and five star hotels. We also ate a lot of delicious food. One of my favorite things was to sit at an outside cafe, eating olives and drinking wine, and people watching. It seems to be a popular destination not for Americans, but for people all over Europe. Our first night we went to a tapas restaurant, and we found an amazing Italian restaurant just down the block from our hotel. I usually make it a rule to never eat at the same place twice when traveling, but this place was so amazing we just couldn't resist. It was called La Tagliatella, and had the most amazing fresh pasta! 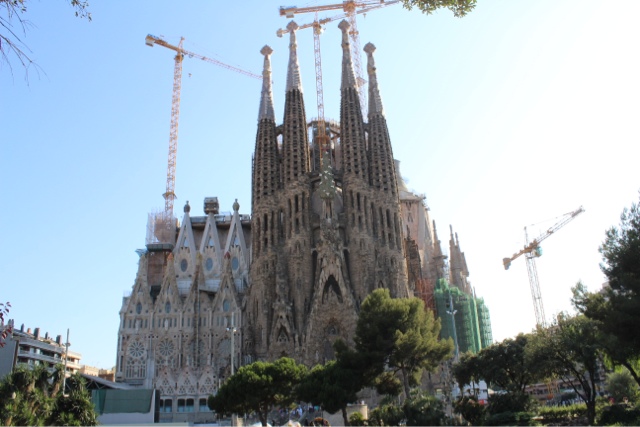 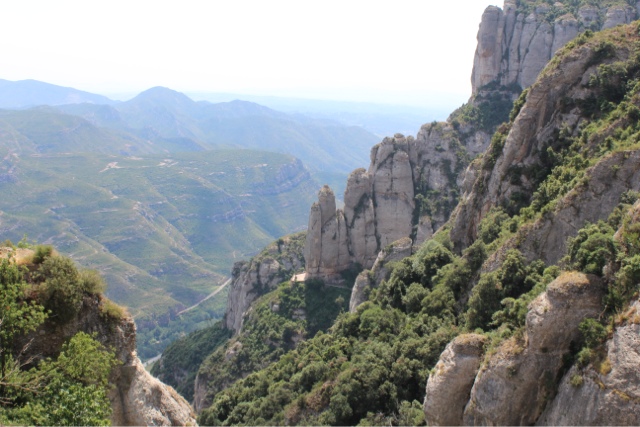 We took an hour train ride out of the city to this beautiful mountain. We took a cable car to the
top for breathtaking views. It is apparently a very popular spot as the church on top of the
mountain depicts a "black Madonna." People waited in line for hours to see her. 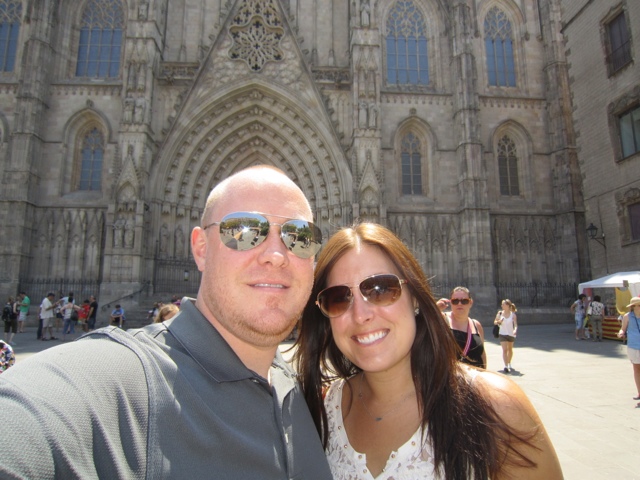 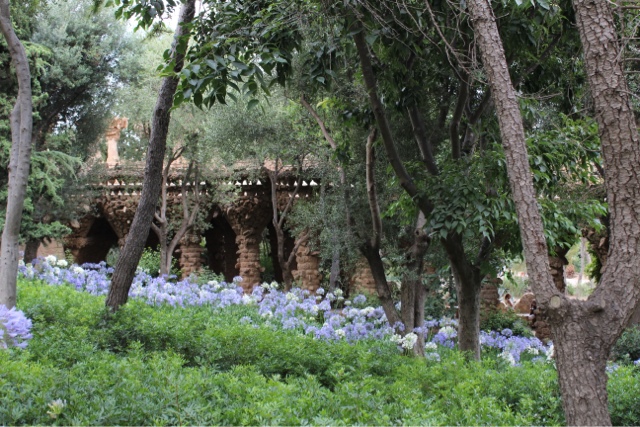 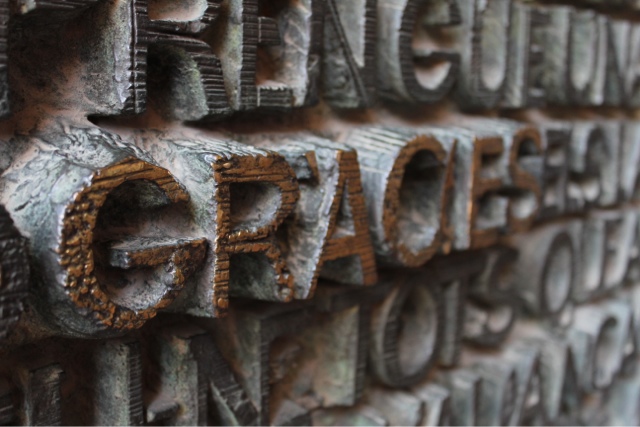 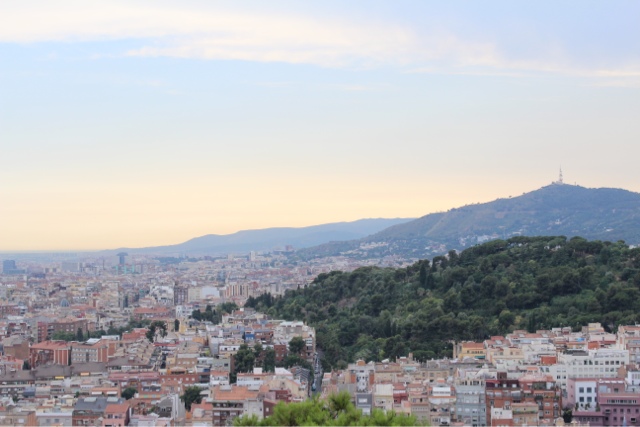 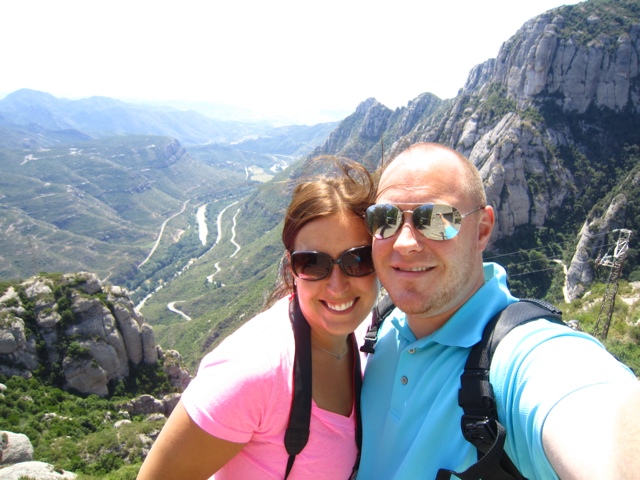 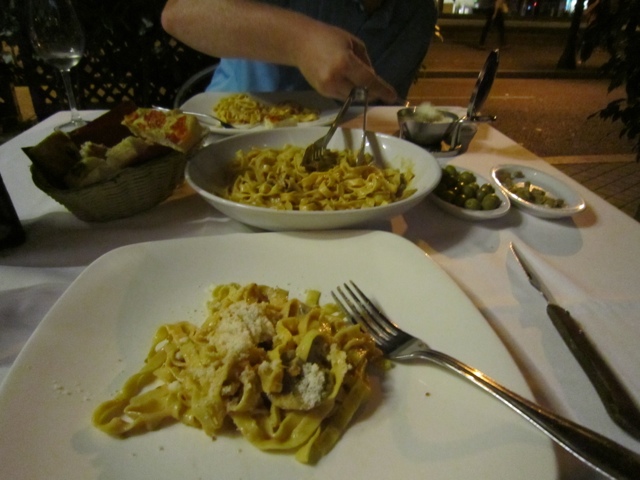 Friday morning it was time to get back to reality and head to the airport. It took us 9 hours of flight time to get to New Delhi, with a layover in Zurich. Let me note here that I absolutely despise the long plane rides. The second flight was seven hours and by the end I was getting pretty crabby. I hate the smell of the bathroom as well as the line to the bathroom, the way the food tastes and smells, and the general feeling of claustrophobia. The worst part was when the guy sitting in front of Matt reclined his chair farther back than those chairs should even be allowed to recline! It made me feel cramped, I can't imagine how much it was miserable for Matt.  At some point I wanted to get up to stretch, so I made a point to shake the guys chair just to show how difficult it was to even get out. And I forgot to mention, he was in an exit row with five feet of room in front of him! The only thing as bad would be the girl across the aisle. She was sitting in between two women who were clearly friends and talking over her (literally) the whole flight. She tried to get them to switch with her, but they both wanted their aisle seats. Rude!

Ok, I am done complaining.

Around midnight on Friday night we arrived in New Delhi. Getting through customs and getting our bags went surprisingly smooth. The Delhi airport is much more tolerable at this hour with such fewer people. After getting our four bags which currently contain our life, we walked to the car pick up where a very nice young man was waiting for us from the Leela Hotel.

There is a saying in India that "the guest is God," and certainly the staff at this hotel live up to that saying. Our bags were carried for us to the car waiting for us with cold waters and fresh towels for our hands and grimy faces from nine hours of stale airplane air. It took us about 25 minutes to drive three miles because even though the airport isn't crowded, there are still an obscene amount of people driving, honking, and maneuvering through a ridiculous amount of fog. And to all you people who say "Oh, but it's such a dry heat there," try being in India during monsoon season...the humid as heck!

Once we got to the hotel we were apparently already checked in and just ushered to our room.  I am  impressed that several employees here actually recognize Matt from his previous work stays.
Everyone is extremely friendly, overly friendly actually. This hotel employs about 100 people too many...There are some people here who are literally paid to smile at me, or hold the door open. It is a little overwhelming to be treated this way. I like carrying my own stuff and I can open a door myself. It makes me feel uncomfortable to be waited on like this, but I'll just convince myself it's good hospitality.

Today is our full day in Delhi, and we leave for Jaipur in the morning. On Monday we begin spending the week with our relocation person to help us get ourselves established. Don't forget, I have never been to Jaipur! I have not seen the city or our apartment, so I am really anxious to get there. We will be spending the week furnishing the apartment, getting phones set up, getting internet in our apartment, etc. I will post again from my new (temporary) home!